Or, the art of British country house interiors

Highclere Castle, a "Jacobethan" country house in Hampshire, has been the home of the Carnarvon family since 1679 [1]. The original Elizabethan house was built on the site of a medieval palace and was later rebuilt in the classic Georgian style; the present day house was designed by famed architect Sir Charles Barry in 1842 [2]. Highclere Castle is most well-known as the Earl of Grantham's grand home in Downton Abbey, but was also used in Marple: 4:40 from Paddington, Jeeves and Wooster: Series Two, Episode One (Jeeves Saves the Cow Creamer); Series Two, Episode Two (A Plan for Gussie); and Series Four, Episode Five (Trouble at Totleigh Towers). 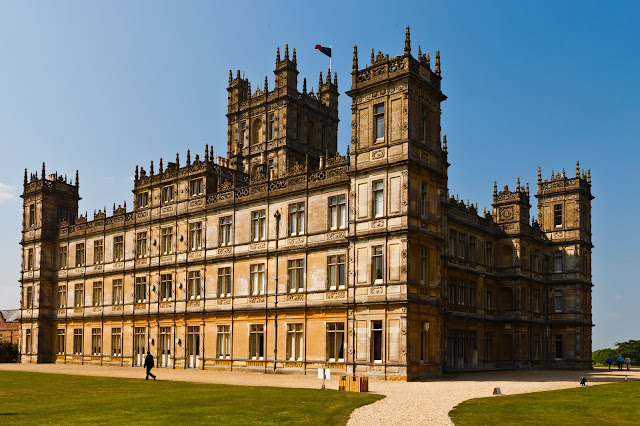 Downton Abbey creator Julian Fellowes in fact had Highclere Castle in mind as he wrote the story and screenplay for the show; his longstanding friendship with the Carnarvon family enabled him to make his vision a reality [3]. As architect Sir Charles Barry said of his design for Highclere Castle, the house was based on three qualities: love of extravagance, love of the past, and love of ancestry [4]. It is easy to understand Fellowes vision and see how it fits into Barry's plan for the house, as Highclere Castle's splendid interiors and extensive art collection provide the perfect setting for Downton Abbey.

In the early 18th century, the Hon. Robert Sawyer Herbert began collecting the art that would form Highclere Castle's impressive collection [1]. During the filming of Downton Abbey, most of the furnishings and paintings decorating the rooms were kept in place, although set designers did bring in some period furniture and frames; nothing in the house could be touched without permission [5].

Saloon:
When first entering Highclere Castle, you are faced with the purely Gothic saloon and staircase, complemented by stone vaulting and clustered columns [6].  The saloon is covered with wall hangings made of hand tooled leather from 1631 that was specially brought back from Cordoba, Spain in 1862 by the 3rd Earl [7]. As the first point of entry for guests and a large space for gathering, the saloon is physically and socially the heart of the house [8]. 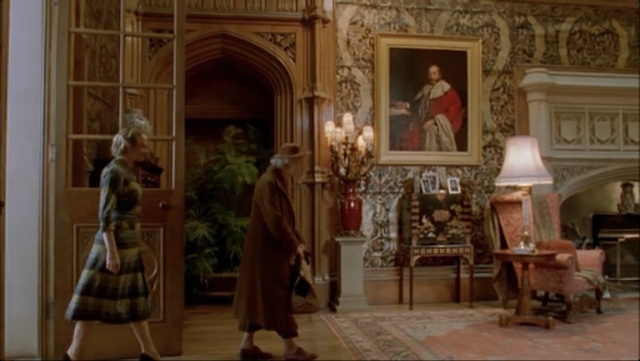 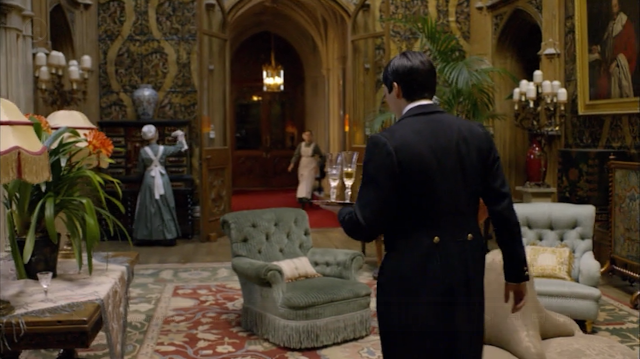 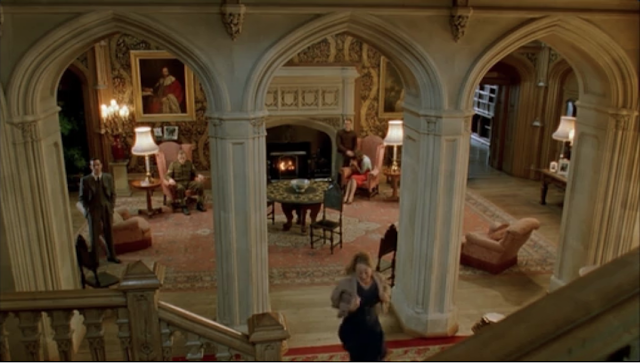 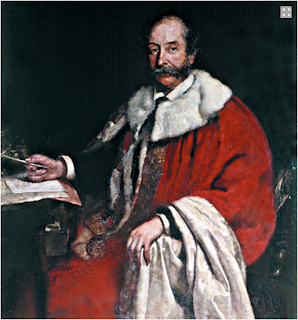 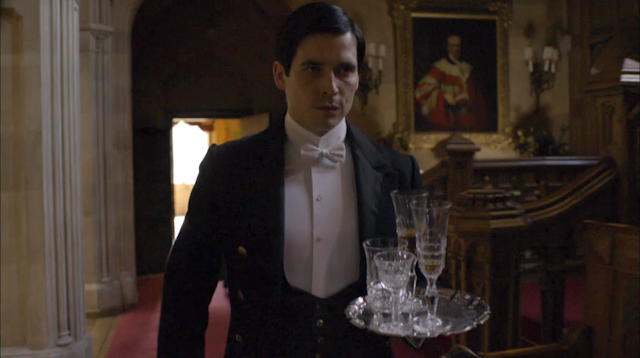 The stagy Gothic style of the saloon was already out of date at the time of its construction in the 1860s; this was a deliberate attempt to reach towards the past [4]. The saloon mirrors Barry's 1840s plan for the entire house, with emphasis on extravagance and ancestry, and provides a dramatic backdrop for many scenes in Downton Abbey, including the family and staff's gathering to acknowledge the end of World War I. 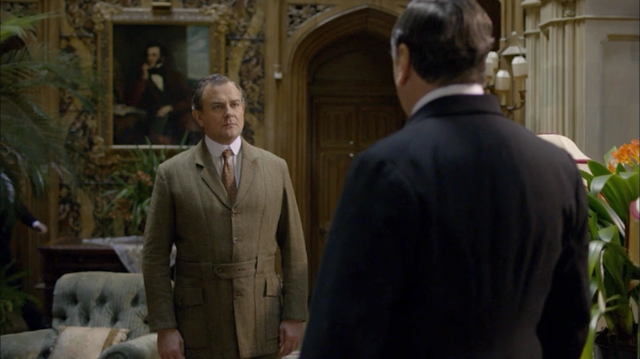 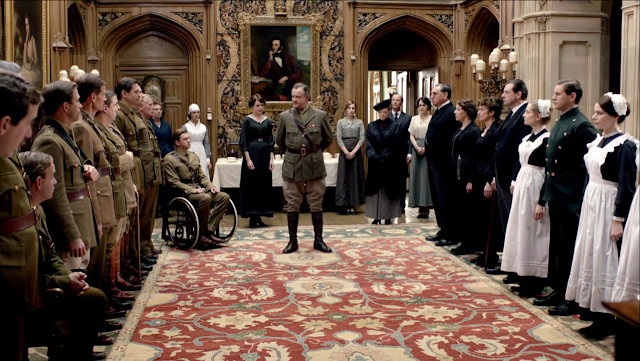 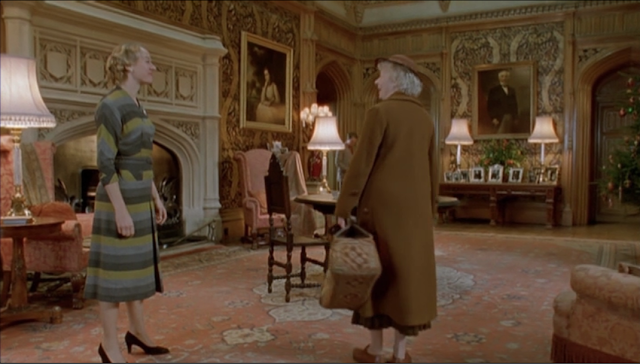 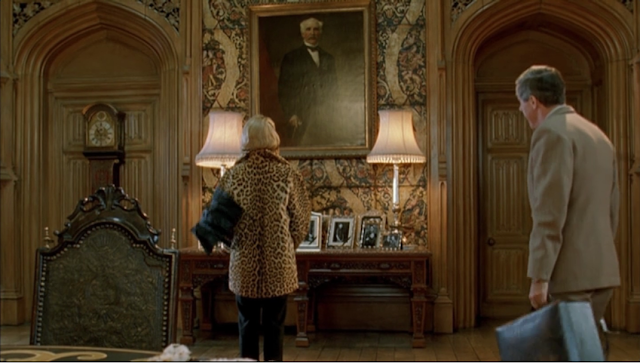 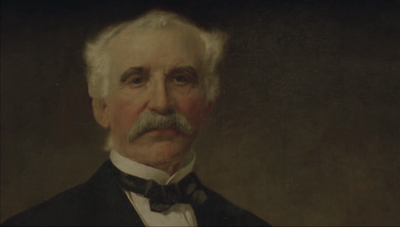 Drawing Room:
The drawing room, decorated with green French silk in a late rococo revival style at the end of the 19th century, contains a number of family portraits of children [8]. The portrait of a young brother and sister holding a dove was painted by Richardson in 1703; these children are Katherine and Robert Herbert, the children of the 8th Earl of Pembroke [4].

Other works in the drawing room include portraits of Henry Herbert, afterwords First Earl of Carnarvon by Zoffany; Henry, Tenth Earl of Pembroke by Reynolds; Lady Almeria Carpenter by Beechey; Seymour, the Marquess of Hertford by Reynolds in 1759; and the Countess of Romney by Reynolds in 1776 [9]. Reynolds was famed for his Grand Manner portraiture and mode of painting individuals to reflect an idea of their social standing, and this type of portraiture is very well represented in the Highclere Castle drawing room [10]. 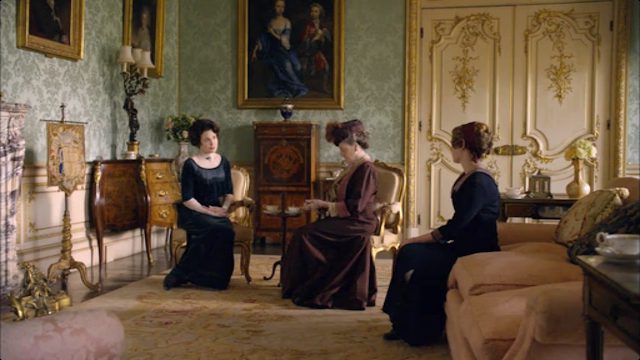 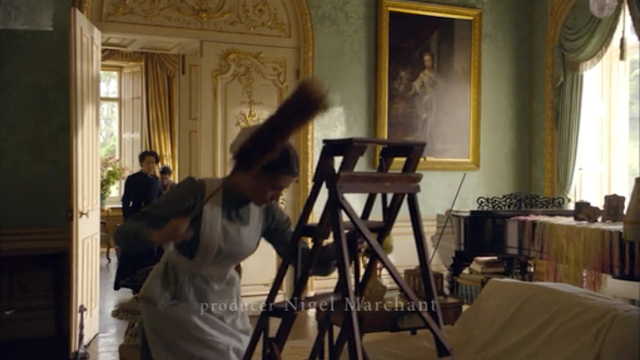 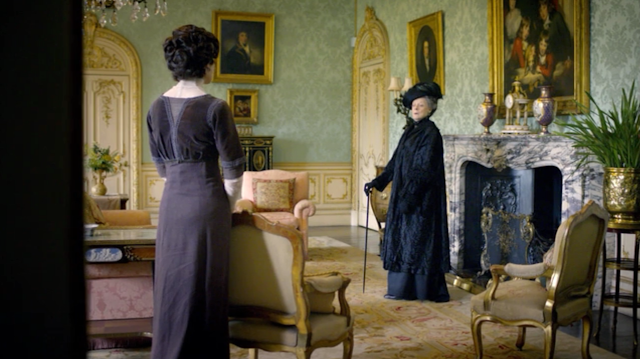 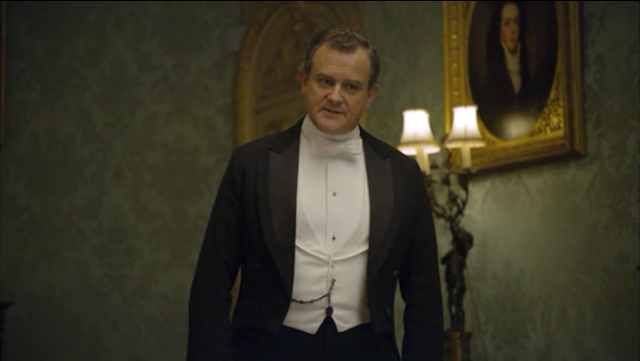 There is one particularly fine group portrait of children displayed in the drawing room; it depicts the Hon. William and Hon. George Herbert in their Montem coats, and the Hon. Charles Herbert and Lady Frances Herbert on either side of them. They are all shown leaning out of the window of the drawing room at Highclere Castle. Lady Frances Herbert on the left was added as an afterthought to the original group [9]. Growling on the window ledge is their dog, Pincher, who very much seems to to be presented in the spirit of his name. 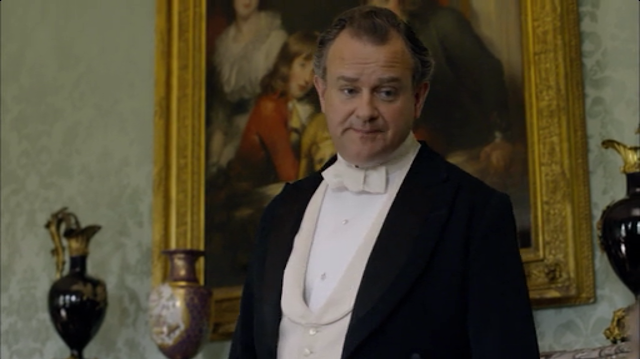 Portrait of the children of the First Earl of Carnarvon- Beechey, 1795 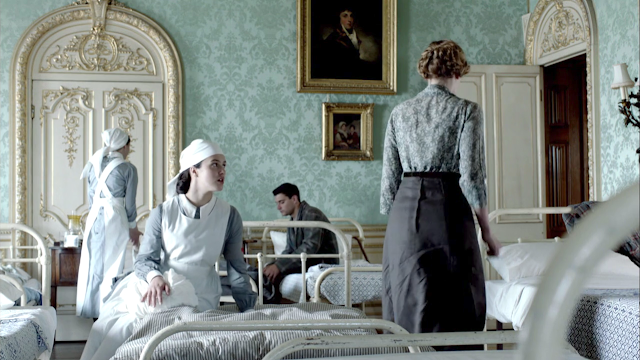 Dining Room:
The multitude of family portraits on the walls of the Highclere Castle dining room emphasize the owner's celebrated ancestry and influential relatives. These ancestors look down on the dinner parties and gatherings of their descendants, as these descendants look back at the portraits and feel all the more connected to their roots and inspired by their heritage. 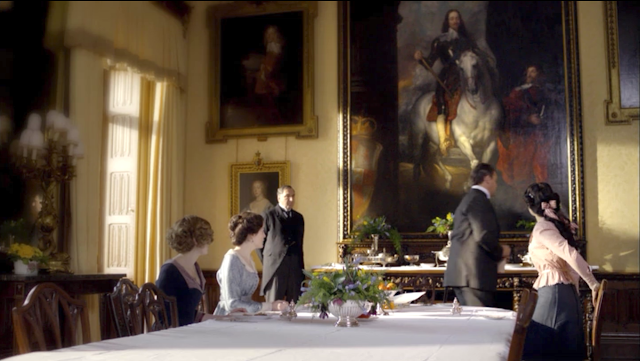 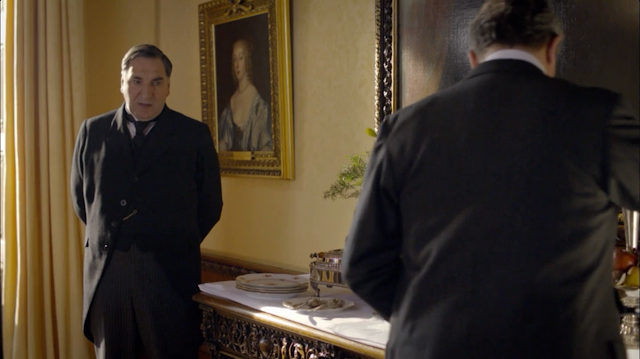 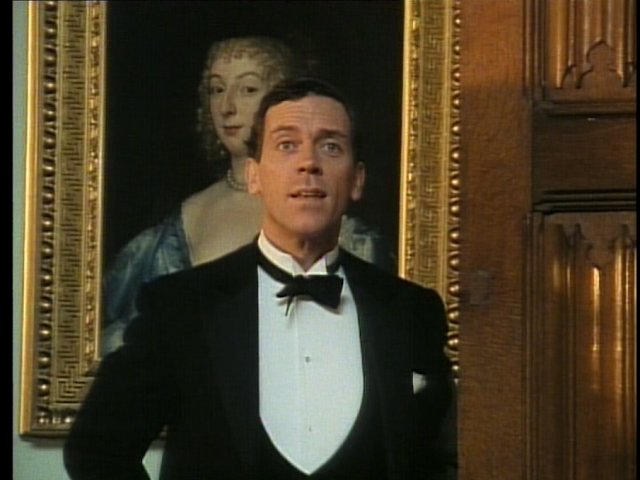 The monumental portrait of Charles I on horseback is most easily visible and recognizable in the background of the dining room. This work is particularly noticeable in Downton Abbey when the family gathers in the morning for breakfast; the sunlight shines into the room, and the Earl of Grantham is positioned right below the portrait of Charles I. Following a long tradition of antique and Renaissance equestrian monuments, Charles I's display reinforces his image as the ruler of Britain, as Lord Grantham's positioning next to it reinforces his image as the ruler of Downton Abbey [10]. Van Dyck avoided painting individuals in conventionally fashionable clothing except in his portraits of royalty; he usually preferred a timeless quality in his works [11]. The original portrait is in the royal collection, but van Dyck made several copies including this one and one at Corsham Court. On either side of Charles I are portraits of Carnarvon ancestors who were part of the civil war in the 1640s [8]. 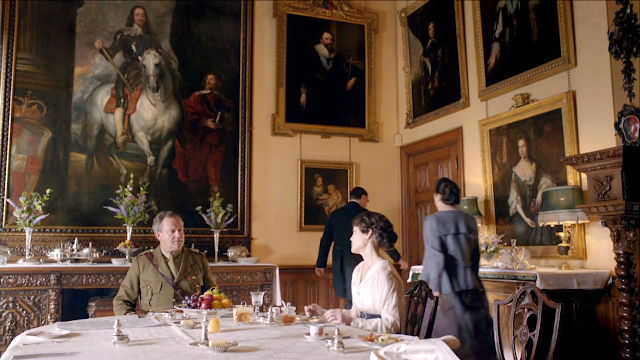 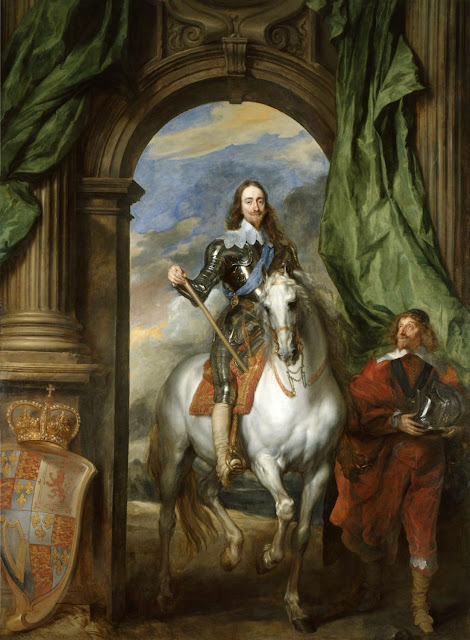 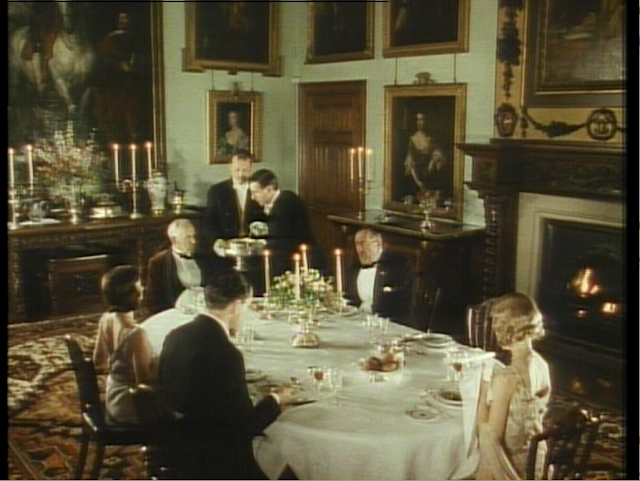 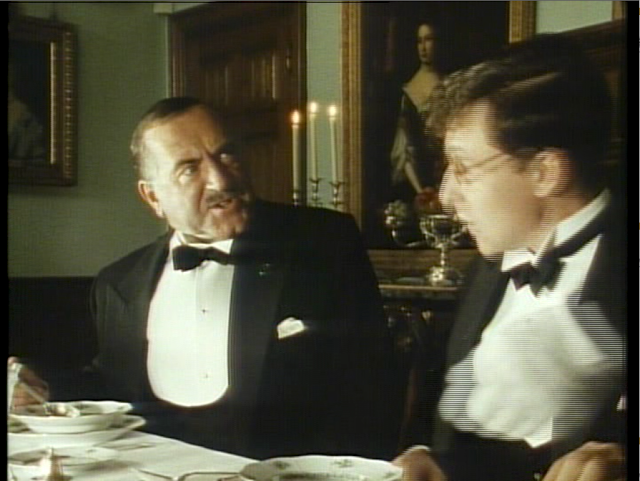 Library:
A portrait of Henry Herbert, the first Earl, by Beechey is displayed over the fireplace in the library; as he gained favor with George III and helped defuse anti-Catholic riots, he was created the first Earl in 1793 [12]. The library was used as a "withdrawing" room by the 4th Earl during the late Victorian period, as a place to discuss politics or sit in peace [8]. This room conveys a feeling of comfort and masculinity, and serves a perfect place for Lord Grantham to retire with the other gentlemen in Downton Abbey [4]. 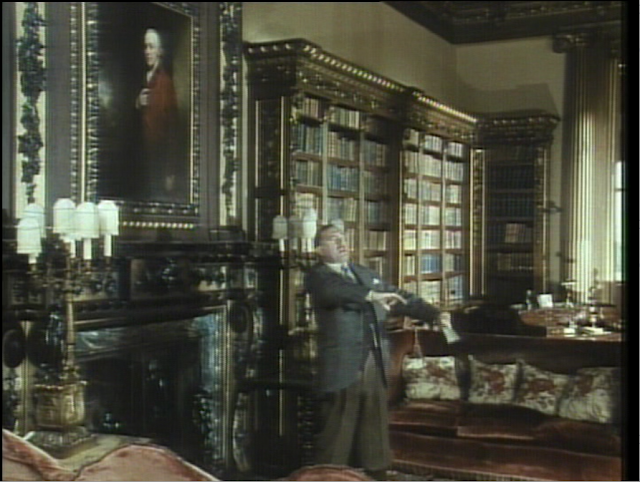 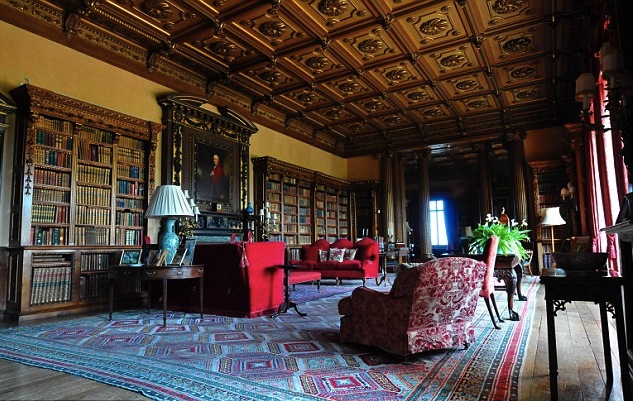 Smoking Room:
Some of the earliest works in the Highclere Castle art collection are found in the smoking room, including 17th century Dutch paintings; also displayed are portraits linking the Carnarvons to family cousins at Wilton House [8]. While the smoking room is not used in Downton Abbey, it can be seen in its representation as Totleigh Towers in Jeeves and Wooster. 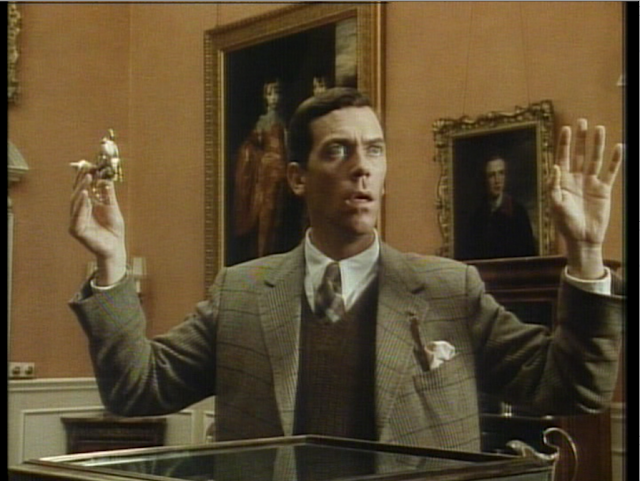 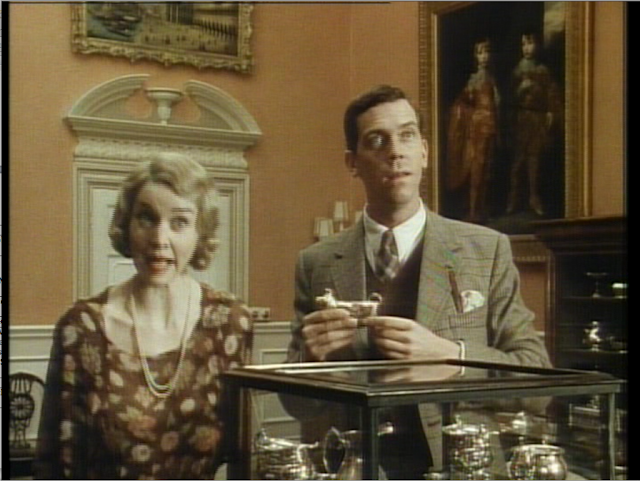 Portrait of George and Francis, the children of the 2nd Duke of Buckingham- Reynolds

Viewers of Downton Abbey have become akin to the polite tourists who would visit Highclere Castle in the 18th and 19th centuries; through watching the PBS series, they experience the house and judge and compare the works of art that decorate its walls. In this way, a modern audience can develop and refine their artistic taste just as visitors to the house have done throughout the centuries [13].